Saleem Yaqub, the founder, and CEO of PitchBoard, has long lived at the intersection of marketing and technology. From his initial jobs in the mid-00’s as a Search and Social Media Optimiser to his time at other marketing agencies before starting his own, Yaqub’s career seems to travel a very defined path, following a general onward and upward trajectory the whole time. There’s one slight detour, though, one little diversion that was more tech than marketing and seems like an outlier when compared with his agency background. Covering a year’s time between 2016 and 2017, Yaqub consulted for NeoReach and led the effort to completely redesign the platform. This obviously got his mind working on the possibilities for his own agency—just about a year after completing his work with NeoReach, Pitchboard launched.

Pitchboard doesn’t compete with NeoReach. As a marketplace, its focus is executing campaigns quickly and at scale. There’s no influencer discovery feature and no relationship management, functions that many competitors include, and which Pitchboard shows to be unnecessary bloat for a marketplace. A marketplace’s value is the way it enables marketers to reach new audiences on a large scale. You can use a platform like NeoReach to find great influencers and data insights and to nurture a long-term partnership with them. But their audiences aren’t the only audiences, and a good marketplace is effective at helping you reach new and different ones. If this weren’t the thinking behind the creation of Picthboard, then it’s definitely the lesson learned.

Marketplaces spend a lot of effort trying to get creators to join up and populate their databases. A voluntary opt-in is the only way they can import their data, but that means a relatively small talent pool to choose from. Some will build algorithms to scrape for possible influencers, but that just means millions of profiles with very limited data. If the point of the marketplace is efficient outreach—to find new audiences in a quick and streamlined way—then influencer discovery is a superfluous step. You really just need to find those audiences.

And this is precisely what PitchBoard does—and does well. Yaqub saw that other companies had already amassed all the data needed to accomplish this task. Pitchboard uses its own machine learning algorithm to parse through influencer data from several sources—NeoReach included—and identify those whose audiences for campaigns. This happens without customers ever having to scroll through lists of influencers then having to deliberate on each one. To be fair, other marketplace platforms do it this way, but they run into the limitations I mentioned in the previous paragraph: they either have good data on a small number of influencers, or they have very little data on an impossibly large number of them. Pitchboard’s approach cleverly avoids these pitfalls and has already attracted customers like Tik Tok, Blue Apron, and FanDuel.

PitchBoard
Dispensing with things like discovery and relationship management, Pitchboard is a marketplace that keeps the focus on campaigns. And data. Lots of data.
Pros and Cons
Brand Safety feature analyses influencer content and attitudes
Brands can create complex requests for a mix of deliverables and compensation
Focus on campaign management means it’s genuinely pleasant to manage campaigns
Payment fees too high, especially on top of a subscription fee
Pitchboard takes a cut of the influencer’s payment, too, alienating talent
Best for: Medium and Large Brands
Ratings
Features
3.8
Ease of Use
5.0
Reporting
5.0
Overall Score
4.6

Pitchboard earns its revenue in three different ways: monthly subscription fees; fees charged to brands when they pay influencers; and fees charged to influencers for receiving those same payments. The payment costs are, to be frank, highly problematic, which we’ll get to shortly. The monthly subscriptions are already pretty costly for a marketplace, but the platform proves its worth in how well it works. There are three levels of access:

These aren’t the highest monthly fees we’ve seen, but they aren’t the lowest, either. Still, they are all fair prices when you compare what you get here over Pitchboard’s competitors in terms of find relevant influencers and easily managing campaigns.  The same can’t be said for those transaction fees, because we all know how much it costs to move money around the internet. It certainly isn’t the 5% influencers are charged (to say nothing of the 10%-20% brands get charged).

It’s an unusual step for a marketplace to take money from the influencers’ pockets, especially when that’s the second time the platform is getting a cut of the transaction. And the brand fees even apply to the retail value of products given to influencers as payment. So, if you box up a $500 product and ship to an influencer, Pitchboard gets $50 - $100 from the brand and $25 from the influencer—even though it had nothing to do with facilitating that payment (and it cost Pitchboard nothing for it to have happened).

Because Pitchboard does away with influencer discovery and management, the user interface is clean and easily navigated. You log in and see a dashboard giving you quick access to all your campaigns—live ones, past ones, and drafts not yet published for pitches. If you had some campaigns going, you’d see a high-level view of each one on your dashboard—with quick stats telling you how many pitches you got, whether there are drafts to review, etc. Your first time logging in will be an especially minimal affair—just a simple white screen where your campaigns will go—but that just means you’ll easily find the “Start New Campaign” button. And from there it’s practically foolproof. 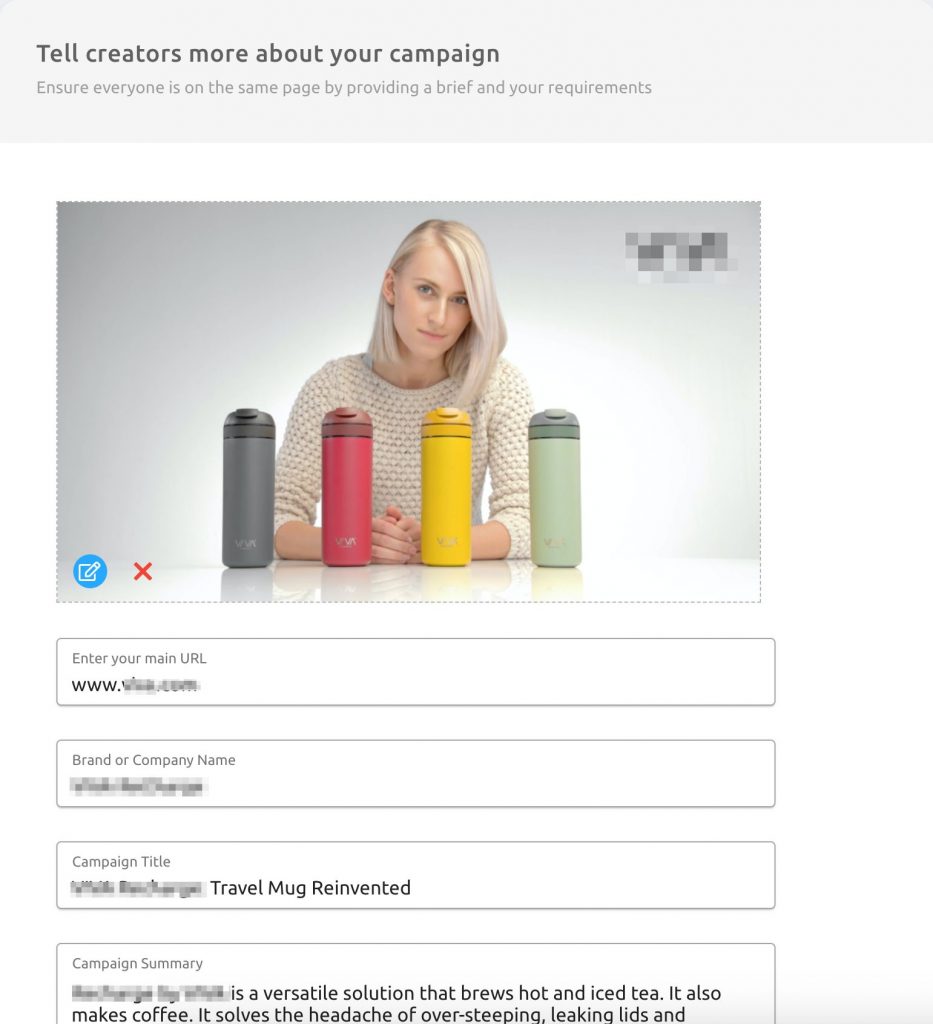 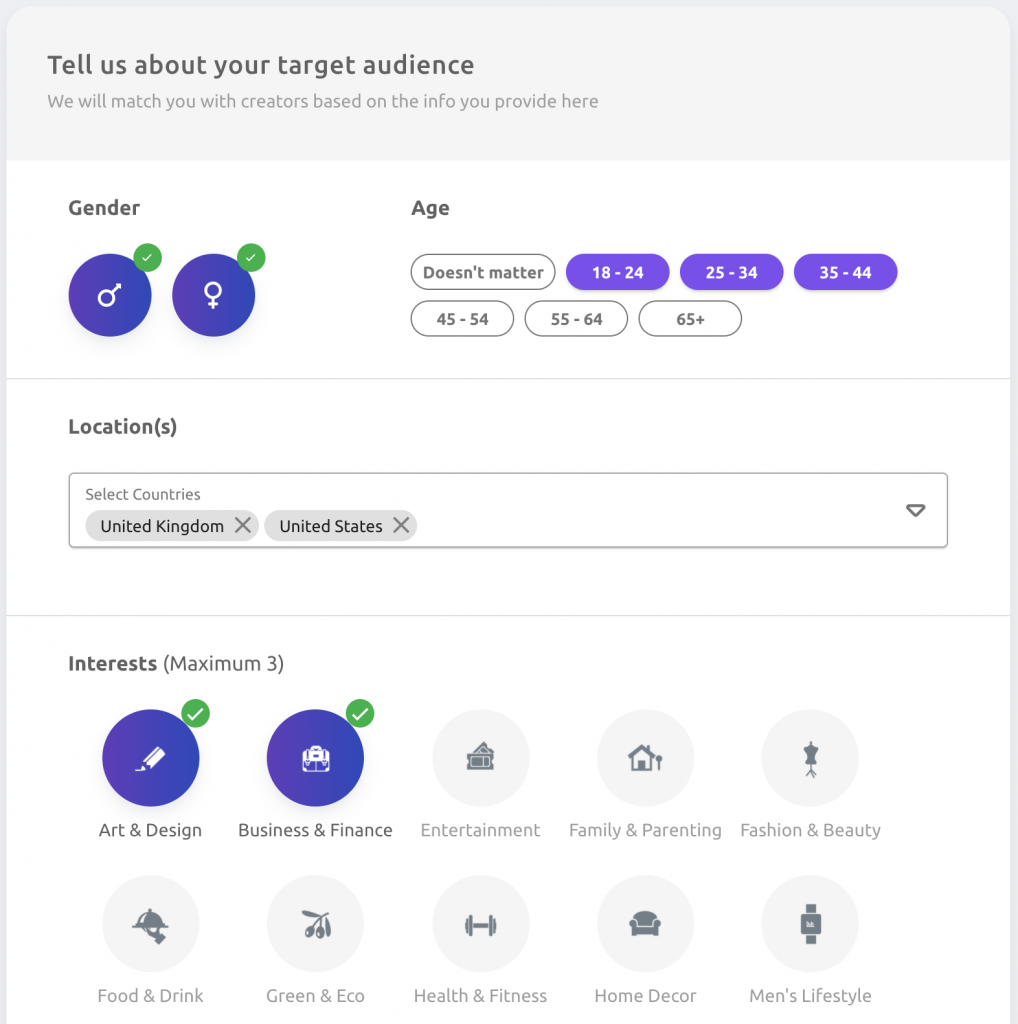 One of the things Pitchboard does so well is the way it handles compensation to the influencers (processing fees notwithstanding). Rather than the narrow approach of setting a price per post, or limiting compensation to one or the other of cash or free stuff, brands can put out a detailed request for multiple pieces of content and a fully fleshed out compensation package. For example, a brand could offer $500 cash, plus a product (or an experience, such as a meal out or a night in a hotel) and require in return, say, 3 Instagram posts, 1 story, and 1 YouTube video. As these packages are defined in Pitchboard, it’s giving you realtime information with estimates showing projected engagement, and cost per engagement.

Once you’ve got everything in order, you can submit the campaign for review, at which point someone on the Pitchboard team will have a look and make sure everything looks good. These manual reviews are there to ensure that influencers are getting invited to something legitimate—that the brands are reputable and offering decent compensation. They also do a quality check on the brief itself: if it looks unprofessional or is poorly written then nobody  looks good in publishing it. There are also some restrictions on the types of businesses that can advertise. If you’re a cannabis slinging pornographer with a new gambling app, you won’t find a home in the Pitchboard marketplace.

When your campaign is approved, then the whole thing goes live as relevant influencers are invited to pitch your brand. This aspect of Pitchboard is another where the platform excels. On the strength of an incredibly well-designed interface, managing campaigns is a downright pleasant experience. There are a lot of tasks involved—vetting the influencers and their pitches, negotiations, reviewing content submissions, and authorising payments to name a few—but everything is so well organised and easy to accomplish that it doesn’t feel like a chore. 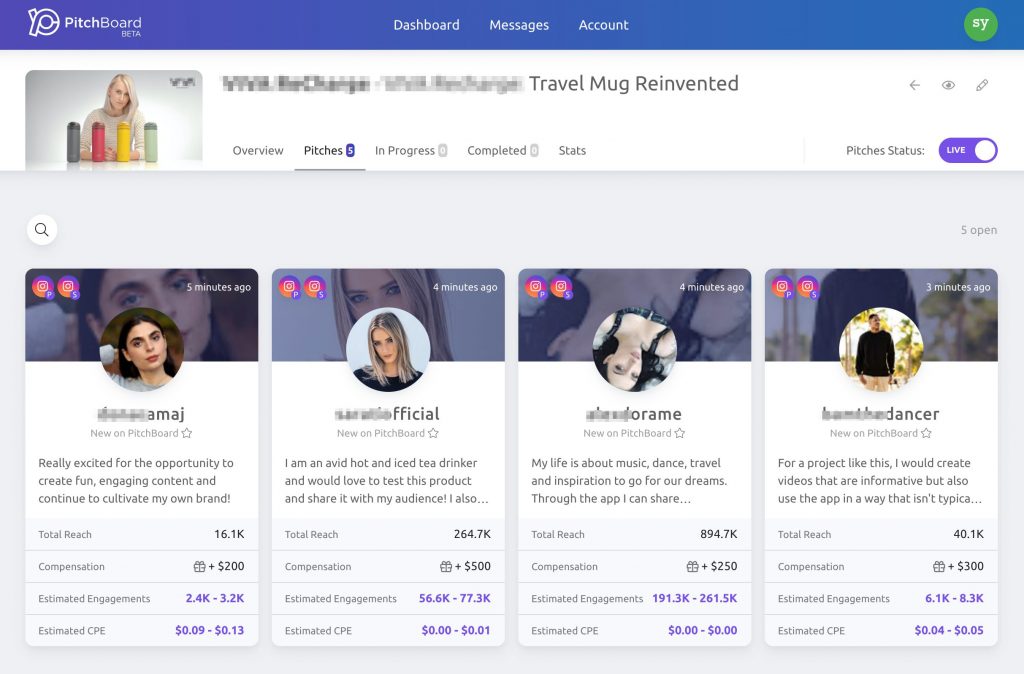 Digging into each influencer that submits a pitch opens you up to a level of data and analytics you just won’t find on competing marketplace platforms. You’ll get an estimated engagement projection for each influencer, as well as a breakdown of the cost of those engagements. You’ll get to know their audience—their likes and dislikes, their brand affinities, their locations, ages, and genders. This is accompanied by an audience credibility score, a result of the algorithm identifying any suspicious patterns in followers (or suspicious followers themselves). There’s also some brand safety insights: sentiment analysis of the influencer’s content to determine the overall tone (positive or negative), as well as the general emotional state of the influencer based on their social posts. 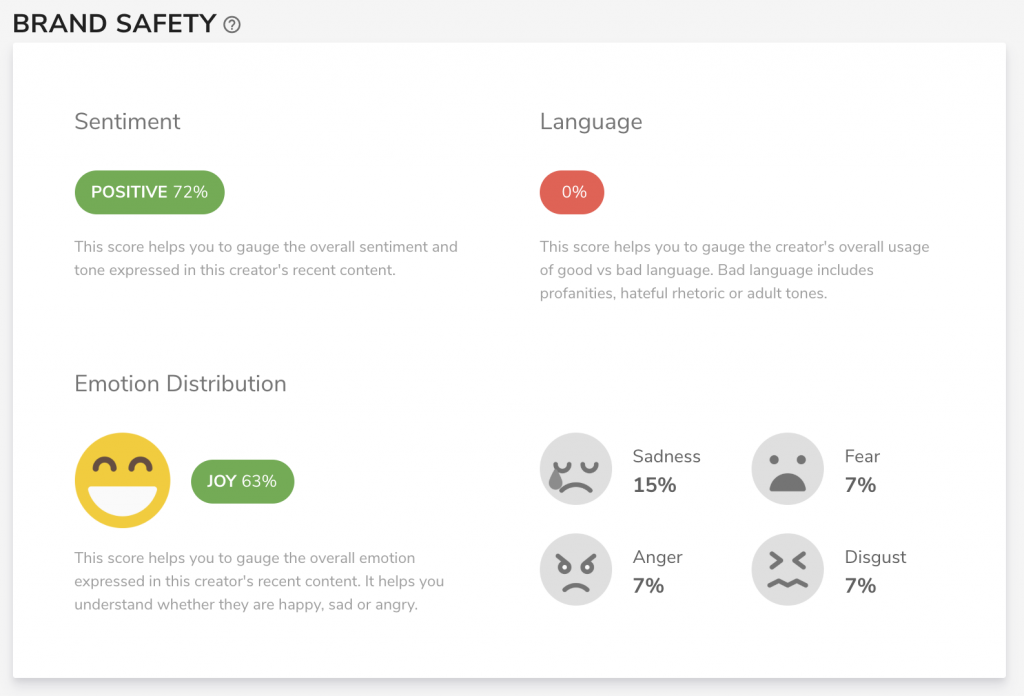 All of this is instrumental in brands being able to make informed decisions about the relative value of each influencer. If someone is asking for money than other influencers, it’s easy to gauge if they’re worth it or not. If you accept their offer, then the money and transaction fees are paid immediately, with their compensation sitting in escrow until they’ve delivered on their end. From there it’s a matter of communication and coordinating the content, and this too is handled cleanly and efficiently in Pitchboard. 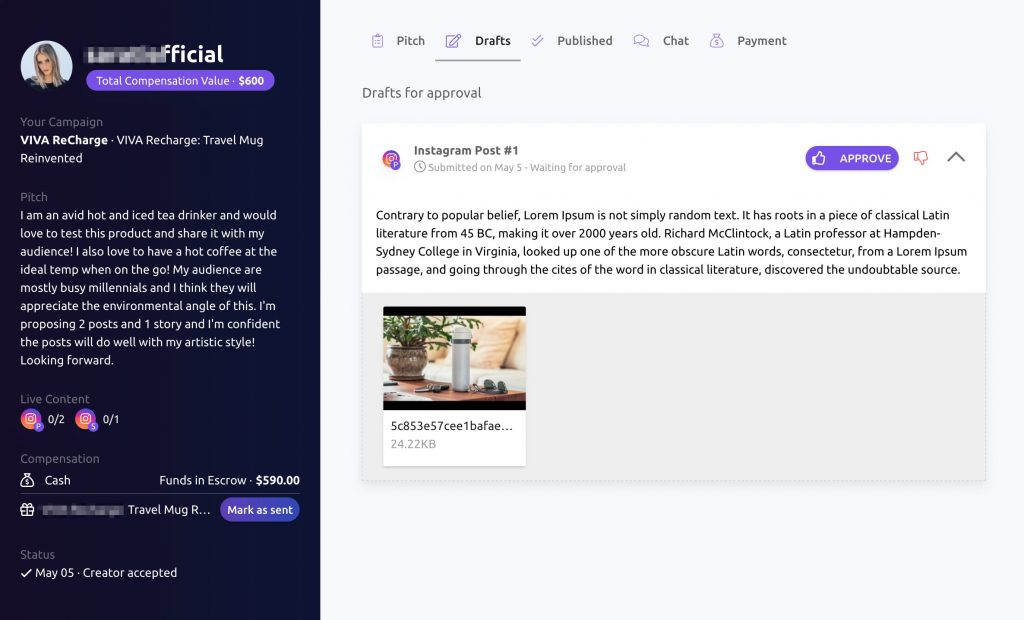 While your campaigns are live, you’ll be able to see which ones need attention from your dashboard—there are alerts telling you whether there’s content to approve or messages that need responding—and as the content is published you’ll see real-time reporting for at both the campaign and influencer level.

Pitchboard has elevated the idea of a marketplace by placing a bigger emphasis on data and analytics than most of its competitors do. They’ve done away with superfluous features that were until now standard, and focused on enhancing the strengths of influencer marketplaces. The result is a platform that can do a lot for its customers—and it looks great doing it.

It’s the first platform of its kind to outsource the heavy data lifting to outside sources. This one move freed them up to develop outstanding algorithms with machine learning, algorithms that can look at that abundance of data, and make human sense of it all. They may find some pushback from potential customers and influencers alike for the high priced fees they impose on processing payments—or the platform might work so well for both sides they’re happy to pay those fees. It’s definitely worth trying it and finding out for yourself.